Another buzzer-beater by Bryant, Robinson on fire 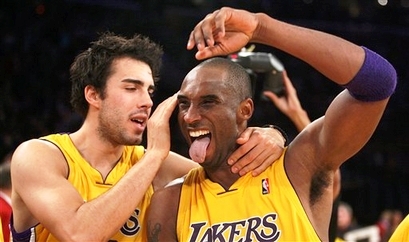 Kobe Bryant hit yet another buzzer-beating 3-pointer and finished with 39 points as the Los Angeles Lakers overcame a 20-point deficit to beat the Sacramento Kings 109-108 on Friday night.

Lamar Odom had a season-high 20 points and grabbed 10 rebounds for the NBA-leading Lakers (26-6). Pau Gasol had 17 points, 16 rebounds and four assists — one of which set up Bryant’s clutch basket from in front of the Sacramento bench. Andrew Bynum added 16 points and four rebounds. Ron Artest missed his fourth straight game because of a concussion.

Spencer Hawes had a career-high 30 points and grabbed 11 rebounds for the Kings, Omri Casspi scored 23 points, and Beno Udrih added 19 points and 13 assists.

Nate Robinson scored 11 of his 41 points in overtime in a dramatic return to New York’s lineup after being benched for 14 games.

Playing for the first time since Dec. 1, Robinson entered the game with 3:01 remaining in the opening period. He made 18 of 24 shots from the field, came within four points of his career high and had eight assists.

Joe Johnson had 28 points for Atlanta, which has lost three straight for the first time this season. Josh Smith added 24 points and 10 rebounds.