Stephon Marbury will play in China 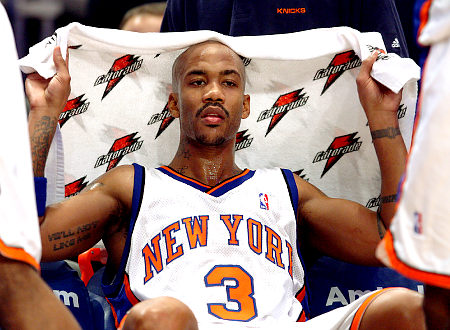 Two-time NBA All-Star Stephon Marbury will become the highest profile American to play in the Chinese Basketball Association after he agreed to join the league′s Shanxi club.
The 32-year-old, a free agent since leaving the Boston Celtics last season, had agreed to a deal with the northern club and would arrive in Shanxi next week, the team announced on its official Web site.

"The aim of signing Marbury is to pay back our fans and try to win more games in the rest of the season," said Shanxi boss Wang Xingjiang.

The 2001 and 2003 NBA All-Star was expected to help boost Shanxi′s ticket sales as well as their chances of making the playoffs. Shanxi is currently 15th in the 17-team league.
In an interview posted on Shanxi′s Web site, Marbury said he wasn′t daunted by the language barrier.

"I′ll communicate with the fans through my basketball," Marbury said. "I think this will be a unique experience. To go overseas to play ball, to live, for me it′s a challenge."

Wang added that Marbury′s salary would not be too high because the former New Jersey Nets and Phoenix Suns player wanted to promote his personal brand of shoes in China.

Celtics coach Doc Rivers said he isn′t surprised Marbury is back on the court.
"I did not think he was done," Rivers said. "I thought someone would actually pick him up this summer. I think he′s going over there probably to prove that he can play."

"If he goes over there and shows what he did here," said Celtics guard Ray Allen, "then I don′t think his time in the [NBA] is done."

Shanxi last season hired former NBA player Bonzi Wells, who scored as many as 50 points a game. The contract ended after less than two months when Wells went on vacation but failed to return on time.